Mom in the Middle: Careful What You Wish For

There. I said it.

Or rather, I didn’t like taking care of a newborn. It wasn’t his fault. My son was a great baby, but I was a hot mess. Exhausted, clueless, terrified, panicky, and continuously questioning my life choices about sums up those first few months.

“Enjoy it!” friends and strangers told me. “It goes so fast.”

Oh yeah? I imagined saying. “ENJOY THIS!” And then I’d shank them in the kidney with a Mum Mum. You know what goes so fast, kindly friends and strangers? 1 ½ hours of sleep. The time between feedings. Discretionary income. But secretly I hoped they were right. It would be so much easier when he’s older, right?

My son is fast approaching three so now I’m one of those well-intentioned-on-the-verge-of-getting-shanked-in-the-kidneys strangers who laments the passing of time. One day it’s sponge baths in the sink and the next you’re cleaning Paw Patrol training toothpaste spittle off the bathroom mirror.

Some things do get easier and there’s a lot to love about this stage, but toddlers are certainly not without their own set of challenges. The grass of the past is always greener and sometimes—dare I say it—I miss having a newborn. Especially when it comes to these things:

They put the TIME in bedtime: Bedtime routines are important and no one appreciates this more than toddlers. They love routines so much they don’t want them to end. What used to be a swift and sweet fifteen-minute pre-bed ritual consisting of two books and snuggles has morphed into the following (in a very particular order that gets reorganized and reshuffled on-the-fly):

All told the constantly evolving “routine” can last as long as forty-five minutes and totally works because at least two out of three of us are conked out when it’s over.

Respect thy Nap: Ever see a family bolt out of a restaurant, upturning chairs and throwing cash at a waitress? No doubt their ticking time baby was about to nod off in his high chair. THE TODDLER NAP? It is the single most important element of a toddler’s well-being. If your child should miss a nap or worse—have a shortened or crappy nap—the world will spin off its axis. (And you thought sleep training was rigorous and inflexible.)

THE TODDLER NAP shall never be forsaken. A proper TODDLER NAP isn’t just for baby’s cognitive development and better behavior. It’s for the parents too. Two to three quiet hours every afternoon? YES, PLEASE. Unlike newborns, toddlers only nap once a day so it’s important to never miss the NAP WINDOW. It’s more spectacular than the Glow Worm Cave in New Zealand. Do not mess with THE TODDLER NAP.

What Not to Wear: Our newborn went to daycare donned in bowties, suspenders, head-to-toe camouflage, and once (okay, four times) a Darth Vader costume. I was his personal shopper, stylist, and fashion police (head-to-toe camo is really hard for anyone to pull off.) While fun to have complete control over one’s wardrobe, I looked forward to the day my son would pick out his own clothes and dress himself so I could sit back and enjoy my morning coffee.

As it turns out, my kid doesn’t like green shirts. He only wants to wear “comfy” pants. Socks “burn his feet” sometimes. We haven’t seen a bowtie in two years.

We’ve all seen those kids with their pants on backwards and winter coats zipped up along their backs. You might think, What’s wrong with those parents? Do they not own a coffee maker? But it’s not the parent’s fault. That is a child who can dress themselves. Dexterity goes both ways. If a kid can put it on, they can take it off. And they will. Pants will be removed with the speed and spectacle of Magic Mike and then staunchly rebuffed with the same misguided determination as a B-list reality TV star during pilot season.

You know what else toddlers love to take off? Diapers. You know what grocery-shoppers frown upon? A bare ass streaking streaking through the bakery section. Makes head-to-toe camo look really good. 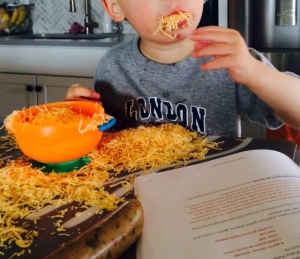 enting for us. Enlightenment would come in the form of strained peas. We were sure of it. Of course choosing healthy, vitamin rich meals for my toddler would be easier than expending all that energy pouring milk into a bottle.

Pleasing a toddler’s pallet is more difficult than solving a riddle from a sphinx. I spent hours every day pondering my son’s next meal. Is there enough Vitamin K in this? Can he have too much Vitamin K? Does he need Vitamin K? Suddenly my self-worth was tied to the predilections of my toddler’s food mood. Are sweet potatoes good or evil? What’s Gerber applesauce got on my homemade applesauce? How much did he eat today? Are his teachers going to report us because he’s had a ham sandwich in his lunch everyday for the last thirty-six days?

It’s not you, it’s them. Toddlers are wishy-washy, inconsiderate, hedonistic weirdos. One day they’re Anthony Bourdain protégés and the next their lunch is a bag of shredded cheese.

Have Bjorn, Will Travel: Guess who has two thumbs and is going to spend the next three hours at Target? That’s right, Helpless Newborn, you are!

I used to think getting out of the house with a newborn took a long time until I had to wrangle a thirty-five-pound sack of stubborn into a pair of shoes, jacket, and car seat. When kids reach a certain age, they have their own opinions about how they want to spend their day and it doesn’t always involve pawing through endcaps jammed with red stickered lemon zesters and shower gel.

Conversely your toddler might actually like where you’ve taken them and decide that is where they shall stay. Forever. Your paltry household with the decorative baskets overflowing with toys, books, and Scooby Doo infested DVR will pale in comparison to a pet store, The Gap, or a gas station mini mart.

Can We Talk? One night as I was force-feeding Quinn spoonfuls of mashed beets, he was doing jazz hands.

“Aw, cute!” I said, calling my husband over to watch. “Look how much he loves Mommy’s beets!”

More jazz hands, more spoonfuls and then a massive amount of projectile vomit. If only I knew when he was full!

As it turns out that’s what he was trying to tell me. He was learning basic sign language at daycare and had I learned it too I would have known “jazz hands” meant “all done.” He also knew thank you, please, more, milk, and I love you.

Being able to talk to and understand your child definitely make things easier. They can tell you if they’re thirsty or their leg hurts or they want to watch Curious George instead of Dinosaur Train.

A growing vocabulary begets confidence and empowerment but also bossiness and officiousness. The other day, Quinn wanted “SOMETHING!” When we offered him a few reasonable choices he screamed “NO! DIFFERENT SOMETHING!” Toddlers repeat things you didn’t know they were privy to. They often resort to the word “No.”

We forgive babies for acting out because they’re helpless and don’t have another means to communicate. But when a toddler is shouting at you to STOP TALKING or demanding POTATO PIZZA AND YELLOW THINGS, people just assume your kid is a jerk and you’ve lost control. I think we all know the sign for, “Just you wait until you have a two year-old.” 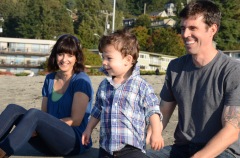 Shelly Mazzanoble is an author and playwright who has published essays and short stories with Scary Mommy, In the Powder Room, Blunt Moms, and Pregnant Chicken. Her essays have been featured and syndicated on BlogHer. Most recently she was part of the cast of Seattle’s Listen to Your Mother show– a national series of live readings by local authors about the many facets of motherhood. She is the mother of a toddler who provides endless fodder she will continue to mine, at least until he’s old enough to understand the word, “litigation.” Visit her blog, or find her on Facebook or Twitter.

← Find the strength to get through each day, both physically and emotionally
Connection: something magical borne of a friendship →