The third time we decided to try to potty-train our three-year-old, we sacrificed going to “Touch-a-Truck” in order to stay home and really “do this” – it was that serious. My husband and I practically bought stock in Hot Wheels cars (to be delivered freely multiple times a day as “rewards”), and any notions I had of “limited screen time” for my son went entirely out the window (OK who am I kidding, that went out the window when I had a second kid eight months earlier….but I digress). If being glued to a phone, computer, tablet or tv screen a potty-master makes, I surrender. You win, technology. And you win, Hot Wheels.

After two failed (though admittedly half-hearted) attempts to potty-train our son earlier this year, the first week of June we were back at it with renewed determination, partially fueled by a strict “must be potty trained” policy at the summer day camp where we were hoping to start him two weeks later. The clock was ticking.

I really sensed my son was ready, and laid the responsibility mostly on myself to truly set aside the time and attention necessary to make a plan and stick to it. So for days my son didn’t leave our house or yard, and was rarely more than a few feet from a potty. A few days into our toilet-training boot camp, I was saying the word “potty” so many times, my son finally looked at me and asked, in all seriousness, “Is there anything else on our list for today?”

Man, he has my Type-A number.

DAYS 1 & 2 –  were pretty brutal, as my friends with potty-trained kids had warned me they would be. A whole lot of talk and not much action, and a steady rotation of soiled underwear into our laundry room. I wondered, desperately, if things were ever going to “click.” We also spent a lot of time outdoors which was maybe kind of cheating – if he pees in the wading pool, it doesn’t really count as an “accident,” does it?

DAY 3 – we BROKE GROUND. A day for the record books. The skies parted and I almost heard angels singing as my son did the seemingly impossible.

I seriously felt like a freaking doula/birth coach, squatting down to reach his eye-level and cheering loudly to my son, “Puuuuuuusshhh!!! You can do it!!! You’re almost there!”

As his face reddened and his eyes sprouted pinpricks of tears from the effort, before I knew it my little boy had done it. He had pooped in the potty.

I burst into tears of relief, and may or may not have emailed my husband photographic “evidence” on an absolutely TMI level. This was after all, the culmination of several days of hard work. Modesty be damned.

DAY 4 – Armed with my newfound knowledge that my offspring was in fact capable of pooping in a small plastic tub, I watched him like a hawk even more intensely, wanting to be sure any momentum gained was not lost by my lack of attention. For about five hours I waited…..waited for him to pee….waited for him to poop….. It was like watching paint dry as he hopped off and on the potty, played, tried again, played some more… One can only lie in wait for so long.

I decided to bake some brownies as a way to pass the time.

Not 10 seconds after cracking open an egg for the recipe, my son called me urgently into the living room where he had been squatting on his potty over a waterproof mat. Pee was spraying straight across the room, over the rug and on a direct path toward his brother’s playpen and our stone-framed fireplace.

I quickly darted toward him to help redirect the firehose of urine down into the potty, while simultaneously trying to determine as quickly as possible which of my fingers was least covered with raw egg and up for the task at hand.

By Day 6 he had gone two days accident-free, and by the end of the second week the accident-free days were occurring more often than not, and I’ve actually lost track now of how many times we’ve left the house with him diaper-free, and still not an accident to date (this was SO scary the first time – venturing out without the insurance policy of a diaper – and I’m sure accidents await us. But so far so good….I’ll take it!).

Tonight we were driving home from a birthday party and my son said he had to pee. After repeated attempts to have him “hold it” and him assuring us he couldn’t, we did what any reasonable parents would do – pulled over in a church parking lot, stripped off his pants and tried to cheerlead him into peeing on the sidewalk as cars drove past. I think he thought we were incredibly weird and embarrassing and that alone inspired him to hold it until we got home, upon which I quickly scribbled myself a reminder note to toss a spare potty in the back of the van and finally install that waterproof car seat cover. Lest my son worry there is ever only one thing on my list.

There are two things that have taken me sooooo long to come to terms with as a parent:

For better or for worse, our family tends to operate on a “Go big or go home” mentality, so naturally, we transitioned our son from a crib to a toddler bed the same weekend we started potty-training.

Both have been adjustments, and both have had their chaotic/stressful/hilarious/what-the-hell-are-we-doing? moments. But isn’t that parenting in a nutshell?

Mostly, I’m just really proud of him. I’m amazed at how far he’s come, so quickly, with the things we’ve asked of him, and I think he’s kind of amazed with himself, too. He’s showing me what he’s capable of, and that’s a pretty awesome thing.

Hard as it is to admit it, he might not need me as much as I think he does. But at the end of the day, I can sleep well feeling pretty sure that means I’ve done my job. 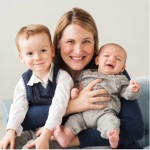 Seattle native Beth Morris is a PEPS Newborn Group Leader, writer for this blog and her own (writeasrainblog.com) and stay-at-home mom to her two sons, Anderson and Jude.  She enjoys salty margaritas and can sing a mean Shania Twain karaoke cover (definitely in that order), and wishes life were more like the TV show Friday Night Lights.

← Dear Brand New Mom: The Worry Factor
Having a baby? Here’s why you’re likely to get divorced soon →